Pinargozu is located 28km north of Kozan, Türkiye in the eastern part of the Taurus mountain range. The mine is a 2-hour drive and 90 km northeast of the city of Adana (population 2.2 million). The mine is also a 2.5-hour drive from the Port of Mersin which connects the to the international commodities market.

Pasinex holds a 50% interest in the Pinargozu Operation Licence through Horzum Arama Isletme AS (Horzum AS), a 50/50 joint venture (JV) company between Pasinex Arama Madencilik AS (Pasinex AS), a wholly owned Turkish subsidiary of Pasinex, and Akmetal AS, the Turkish mining company that owns the nearby past producing Horzum zinc mine.

Pinargozu is a Carbonate Replacement Type zinc geological model. The Pinargozu carbonate replacement zinc project is similar to CRD deposits in Mexico such as Naica. The mine has been in production since 2014, producing both zinc oxides and zinc sulphides of DSO (direct shipping ore) grade material.

Until 2021 the mine production was primary zinc oxides. With a 4th adit completed at the 541 level the future of production will skew towards zinc sulphides. The average grade of the zinc sulphide product sold in Q3 2022 was 51%. Disclaimer: The below information may be adjusted throughout the year. In the province of Adana, south-central Türkiye, there is a 80 kilometre-long corridor between the historical Horzum zinc mine in the south and the historical Ak cal/Belbasi zinc mines near Tufanbeyli in the north. This area is underlain by a northeast-southwest trending belt of carbonate-dominated rocks, the Horzum Zinc Trend (HZT), known to host Carbonate Replacement-type zinc-lead deposits. There are several known historical small high-grade oxide zinc deposits in these rocks but the HZT had never been systematically explored using modern, advanced exploration techniques and models. The potential is strong for discovery of new much larger oxide and sulphide zinc deposits.

Recognizing this potential, Pasinex began acquiring exploration properties in 2012. Late in 2012 Pasinex, through its wholly owned Turkish subsidiary, Pasinex Arama ve Madencilik AS, formed the 50/50 Horzum AS joint venture (JV) with Akmetal AS, a large Turkish mining company and historical operator of the Horzum Zinc Mine. The JV combined the technical expertise of the Pasinex team and the mining infrastructure capabilities of Akmetal AS. Pasinex transferred its exploration properties into the joint venture.

The joint venture has a mandate to explore, develop and mine for zinc and lead mineralization in the provinces of Adana and Kayseri, Türkiye. The key focus area is the JV properties concentrated along the HZT extending at least 20 kilometres to the north of Horzum Mine.

The Akmetal-owned Horzum Mine produced approximately 1.0 million tonnes of zinc oxide ore grading 20% to 30% Zn from 1974 – 2000. From 1985 to 1997 it produced approximately 420,000 tons of sulphide ore. Ore was shipped to the Kayseri zinc smelter for processing. The Horzum property is not part of the JV but Pasinex controls a 5% interest in the property in exchange for providing exploration, geological and metallurgical consulting services to Akmetal for this project.

The JV acquired the Pinargozu property in 2013 from a private Turkish party for the sum of US$250,000. The Pinargozu license lies immediately to the north and east of the Horzum Mine on the HZT. The property is easily accessible by a gravel road connecting to Highway 815. In 2015, the JV made it a priority focus to develop the Pinargozu Mine in order to use cash flow from the sale of mined ore for development of the mine and exploration.

In 2012 the JV acquired the Akkaya property, located 1.5 kilometre north of Pinargzou Mine along the HZT. In 2015 additional properties were acquired along the HZT.

Türkiye’s geology is very complex and consists of several continental fragments (terranes) which were joined together into a single landmass in the late Tertiary. Türkiye is geologically divided into three main tectonic units: the Pontides, the Anatolides-Taurides and the Arabian Platform. Several thousand meters of shallow marine carbonates were deposited over the Anatolide-Tauride terrane during the Mesozoic. The terrane was intensely deformed, partly metamorphosed and intruded by calc-alkaline magmatism during the Late Cretaceous Alpide orogeny. 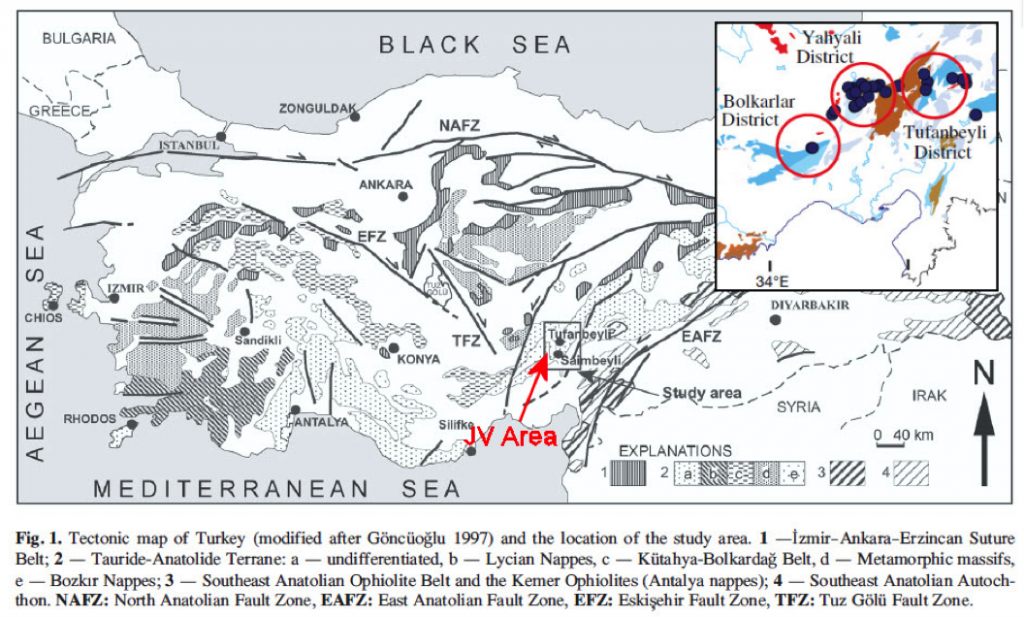 The project area straddles both the Bozkir and Geyik Dagi Units of the Central Tauride Belt portion of the Tauride-Anatolian Terrane. Post-Devonian-age strata overlie these two units in places. All three rock packages are known to host zinc mineralization.

The joint venture properties lie within the 80 kilometre-long corridor between the historical Horzum zinc mine in the south and the historical Ak cal/Belbasi zinc mines near Tufanbeyli in the north. It is underlain by a northeast-southwest trending belt of carbonate-dominated rocks which range in age from Cambrian to Upper Cretaceous. These limestones host reef breccias (which control zinc deposition near Tufanbeyli) and are subject to faults and fractures, dissolution collapse breccias, and lithological transitions (which control zinc deposition at Horzum). These limestones are primary targets for Carbonate Replacement-type zinc-lead deposits.

Carbonate Replacement Deposits (CRD) are orebodies of metallic minerals formed by the replacement of sedimentary, usually carbonate, rock by hydrothermal metal-bearing solutions in the vicinity of igneous intrusions. The mineralogy changes with distance from the intrusive rock. Closest to the intrusion is the copper-gold zone; next is the lead-silver zone, then the zinc-manganese zone. Typically CRD deposits are much younger than their host carbonates. This is in contrast to Mississippi Valley Type (MVT) deposits typically occurring along passive tectonic margins where the ages of the mineralization and the host carbonate are very similar and the ore fluids are typically low temperature (100 °C-150 °C) and have the composition of basinal brines.

The shapes of CRD deposits are often strongly controlled by faults and fractures in the rocks through which the mineralizing fluids flowed resulting in deposit shapes including “chimneys” for deposits with vertical dispositions, and “mantos” for deposits with horizontal, blanket-like orientations. Chimney deposits are often formed closer to their igneous source while manto deposits often occur further away and are defined by a strict stratigraphic control on their distribution, generally within a porous formation within a structural trap site. The igneous link to manto deposit formation is usually not conclusively proven. CRD deposits are notoriously difficult to explore for as there is a sharp contact between high grade mineralization and barren host carbonate rock. Limestone just inches from the mineralization can appear fresh with no alteration or geochemical signature.
Geochemical characteristics of the Horzum and Pinargozu deposit strongly suggest that they are CRD deposits, rather than MVT. It is thought that Pinargozu is at the oxidized manto “top” of what they conjecture could be a larger CRD orebody at depth (see figure below). 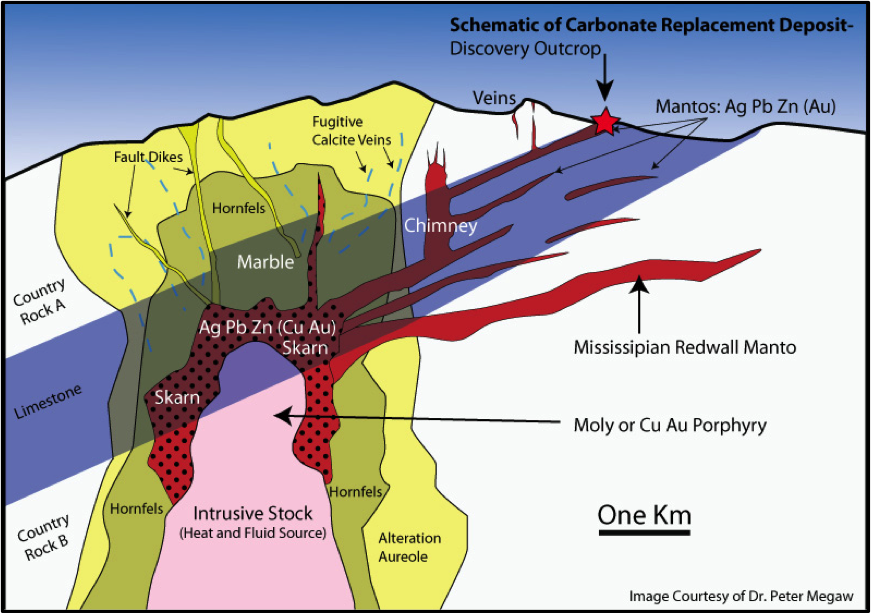